Cervical screening: How enduring use of 150-year-old speculum puts women off smear tests 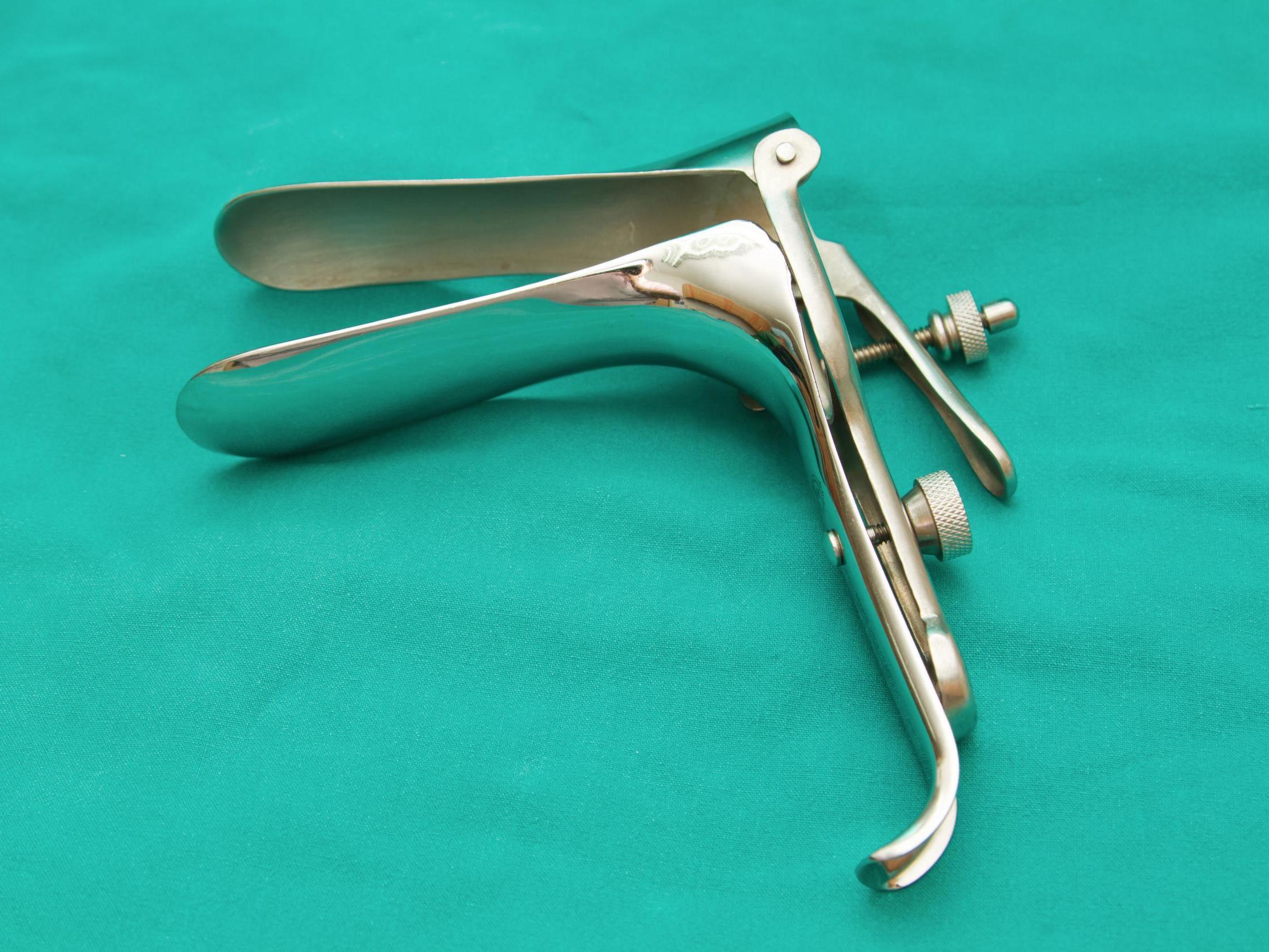 Every year, around 3,000 new cases of cervical cancer are reported in the UK. Despite approximately 99.8 per cent of cases being preventable, there are still many misconceptions surrounding cervical cancer, particularly with regards to smear tests and HPV. Cervical Screening Awareness Week, an annual campaign led by Jo’s Cervical Cancer Trust, is being held this year from 15 to 21 June.

This article was originally published on 10 June 2019.

Up until a year ago, if you found yourself on the northeastern corner of Central Park in Manhattan, you may have stumbled upon an imposing bronze statue of a male surgeon. The inscription identified him as J Marion Sims, MD – whose “brilliant achievement carried the fame of American surgery throughout the entire world”.

In April 2018, more than a century after the statue was first erected in 1894, the city of New York decided to remove it following a number of protests. Sims had spent years using enslaved black women as guinea pigs to test medical procedures, inflicting unimaginable pain with barely any form of anaesthetic and treating these women as subhuman creatures to whom the Hippocratic Oath need not apply.

Yet Sims’s legacy as the “father of modern gynaecology” lives on, particularly so for women undergoing cervical cancer screenings – or smear tests – during which they are faced with the speculum, essentially unchanged since Sims created it in the 1840s.

Cervical screenings are arguably one of the medical procedures with the most intense disconnect between what health officials claim it is (painless, simple, mildly uncomfortable but “over in minutes”), and what some women report the experience to be: painful, humiliating and, frankly, not worth it.

Over the years, many attempts have been made to address the worryingly low rates of patients attending their tests. One of the more common tactics is to try and terrify women into submission, with the spectre of Jade Goody’s grieving family looming over every campaign telling us that cervical cancer is one of the deadliest diseases. Yet 10 years after Goody’s widely publicised death, attendance is at a 19-year low, despite ads of devastated-looking women with shaved heads telling us to not “regret it later”.

When guilt-tripping doesn’t work, other tactics to try and encourage women to book smear tests have included infantilising campaign slogans like “Don’t be a diva, it’s only a beaver” and “You’ll wax your bikini line but you won’t get a smear!”

In among the shaming of women who fail to attend smear tests, no one seems to have considered the possibility that perhaps it’s not millions of women who are the problem, but rather the way in which the test is conducted – a relic of Sims’s experiments of the 1800s, which treated women as objects to be fixed, rather than humans with complex feelings around bodily autonomy and differing anatomies which can drastically change their experience. And it all revolves around the speculum.

The speculum and the way in which it is used has been believed to strip women of their agency for some time. In 1972, feminist activist Carol Downer was arrested, imprisoned and put on trial for “practicing medicine without a licence” after she taught women how to insert speculums and examine themselves.

Even today, women using speculums themselves is rarely offered as a choice – even though many women report that they would feel much more comfortable doing so.

Professor Janice Rymer is the vice president for education at the Royal College of Obstetricians and Gynaecologists, and a professor of obstetrics at King’s College London. She has performed countless cervical exams, and agrees that if women want to insert a speculum themselves, there’s no reason to not offer this option.

“Intimate examinations are often difficult for many women, and communication is key in helping a patient feel more comfortable,” she said. “You do not want to traumatise a woman. This is particularly important during a woman’s first smear test.”

One of the reasons often given for the pain some women suffer is that they may have a “retroverted” or “tilted” uterus – meaning the uterus is tipped backwards so that it aims towards the back instead of forward towards the belly. Estimates suggest at least one in five women likely experience this – although there’s evidence that it could affect up to a third of all women.

Professor Rymer explains that while this can make speculum insertion slightly trickier, it shouldn’t make it impossible. “In a gentle speculum examination, if you can’t see the cervix, then in that case I would conduct a manual examination to better understand the positioning of the cervix before reinserting the speculum.”

Yet many women with a tilted uterus report an unwillingness of doctors to adjust their methods or offer pain relief.

Victoria* is a 51-year-old mother of two based in Brighton. She realised there was something unusual about her anatomy at a young age, when she struggled to insert a tampon according to the instructions. She subsequently found out she has a retroverted uterus. Victoria’s mother had cervical cancer, so she is diligent about attending her smear tests, even though it can be a frustrating and uncomfortable experience.

She said: “I always tell them I have a retroverted uterus and some know how to deal with that but some don’t. If you insert the spectrum as usual you won’t be able to get it in more than a tiny bit. The last nurse couldn’t do it until I sat on my hands and told her exactly what to do.” She has never heard any discussion of addressing the tools used.

Considering the vast advances in technology, medicine and engineering that we’ve seen over the past hundred years, it seems incongruous that the continued use of an instrument designed in the 1840s by a man who had no interest in his female patients’ comfort is still being routinely used to protect them from cancer.

The first instance of a true rethinking of the speculum came in 2005, when a company called FemSpec designed and patented an inflatable speculum made out of polyurethane, the same material used to make condoms. It was about the size of a tampon, and expanded once inside the body. Yet despite initial interest, there was little uptake from the medical community. Writing in The Atlantic, Rose Eveleth explains that doctors simply didn’t want to use it. FemSuite’s director of marketing said: “Doctors and nurses would see it and praise it but then they didn’t want to take the time to learn something new.”

Subsequent efforts seem to bear out an unwillingness among the medical community to embrace innovation. In 2016, a student at the Pratt Institute designed a prototype for a speculum with a curved shape, to make insertion more comfortable, as well as preventing pinching and opening vertically, rather than horizontally – but as of yet nothing has come of it.

A generalised dismissal of women’s pain is a huge problem across the board, and is perhaps most clearly represented in attitudes towards smear tests, where women are essentially told to “suck it up”, while the establishment ignores the opportunity that medical innovations offer which could make it a much less traumatic procedure.

Constance is 42, and lives in Hampshire. During childbirth she was given an episiotomy – a cut in the vagina to help with labour – and she soon realised something was wrong.

“No GP I saw seemed to see that I had effectively been closed up [through botched stitching]. Various GPs told me I had a psychological problem, needed some cream, or to try sex,” she said.

She still struggles with the idea of smear tests, but Constance believes that if the speculum were smaller, softer and more comfortable – and if she were able to insert it herself – it would make a big difference to her experience.

And there are seeds of change ahead, as more and more doctors and activists are seeing the value in rethinking the experience of cervical screenings.

In the US, a group called Ceek Women’s Health has designed a range of speculum options, based on the understanding that women’s bodies and emotional needs require different sizes, shapes and features.

Another exciting innovation is Yona, a device which tackles a range of issues, including removing the noise a speculum makes when it’s being screwed open, and using three bills rather than two, allowing for the same visibility without having to stretch the vagina as wide, and – inspired by the sex toy industry – is made from silicone.

In the meantime, better training is crucial for medical professionals conducting smear tests. Professor Rymer, for example, pioneered a new training method where lay women teach doctors to perform intimate examinations. “This not only improves their technical skills but also their communication skills,” she explains.

The wider medical community is also beginning to recognise the value in empowering women when it comes to the use of a tool like a speculum. According to Jo’s Cervical Cancer Trust, 80 per cent of women would prefer to self-sample at home, rising to 88 per cent for women who had delayed having a smear test. After a study in the British Medical Journal confirmed the value of at-home tests, the Department of Health is now considering this option.

The responsibility of making smear tests more comfortable should not be on the patients, but there are things women can do to feel more in control. Celia* is 50 and based in the south west. She has struggled with smear tests her whole life, so she now makes double appointments to ensure there’s enough time for her and her doctor to not feel rushed. Many women with a retroverted uterus find that sitting on their hands during the test is incredibly helpful, and there’s no harm in requesting a smaller size of speculum or asking to insert it yourself, just as Carol Downer encouraged women to do half a century ago.

Professor Rymer also strongly encourages women to speak up if they find the procedure painful, request a particular gender of practitioner and always know that they can ask for it to stop at any time.

With more conversation around smear tests than ever before and the pace of innovation gaining momentum, it seems likely that we could see a real shift in the narrative, placing the burden of increasing attendance back where it belongs – on the shoulders of the medical community, rather than the women.

*Names have been changed to protect anonymity

You can contact the Jo’s Cervical Cancer Trust free helpline on 0808 802 8000. Click here to check the helpline opening times.​