‘I deal with gunshots every day. This is the only thing that scares me’: Doctor gives coronavirus interview live from emergency room 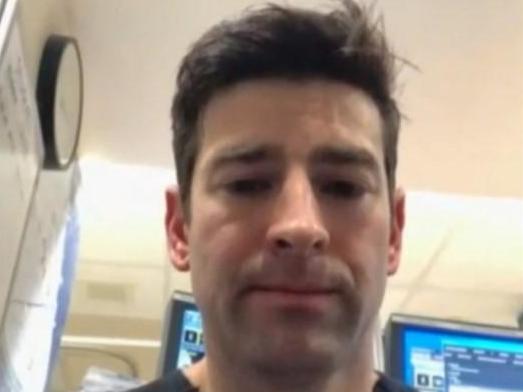 A Chicago doctor has described life as a medical professional on the front line of the coronavirus outbreak.

Dr Scott Samlan, who works at the Mount Sinai Hospital on Chicago’s west side, spoke to CBS News’ David Begnaud from the heart of the crisis, giving the interview directly from the emergency room of the hospital.

“I deal with gunshots every day and trauma and crazy stuff and this is the only thing that scares me,” the doctor said as he began the powerful virtual interview.

“This is the most scared I’ve ever been being an ER doctor, and it’s not just because of me. It’s because I have a wife and a 2-year-old and a 1-year-old at home and I don’t want to expose them,” he told Mr Begnaud.

Dr Samlan explained how doctors were being forced to diagnose all patients coming into the ER with respiratory problems as having Covid-19, as they’re unable to risk waiting for the three days it takes to get test results.

“If their white count is normal and they’re lymphopenic, which is something that we look at, and their x-ray looks like Covid, and they’re influenza-negative, it’s Covid,” he told the broadcaster.

When asked by Mr Begnaud if the doctor was seeing evidence that the disease was only severely affecting older patients, Dr Samlan replied: “you can tell that to the 27-year old I intubated last week who had no medical problems.”

During the interview, another doctor, Dr Chris Scodeller, conveyed frustration with lack of supplies, including Personal Protective Equipment (PPE), which allows the doctors to carry out their job as safely as possible.

“There was the CDC that said we could use bandanas as a form of protection for ourselves instead of masks, so I got one that I carry in my pocket,” Dr Scodeller said.

“It’s frustrating, it feels like the government let us down.”

Last week, a nurse’s union hit out at New York governor Andrew Cuomo for insisting that nursing staff have enough protective equipment for the immediate future.

A nursing manager who cared for coronavirus patients at a Mount Sinai hospital died of the virus last week and staffers alleged to The New York Post that PPE shortages could be tied to the nursing manager’s death.

A spokesperson for Mount Sinai has vehemently denied the claims to The New York Post.

Dr Scodeller has reportedly been using a respirator he got from a previous job and a filter his father gave him from his job in construction.

He expressed to the CBS reporter solemnly that “patients are dying alone” because of the isolation measures necessary in hospitals to try to contain the spread of the virus.

Dr Samlan finished the interview by urging people to listen to the government’s stay-at-home orders to help stem the spread of the virus in the US, which now has just short of 200,000 cases on Wednesday according to a running tally by John Hopkins University.

“I want people to stay home, this is the real deal,” he said.

“If you have a friend or a colleague or anyone you know in the healthcare industry who’s working the front lines, just send them a text saying god bless you, love you, thank you for what you’re doing, that’s all we need.”