Coronavirus: Nurse demonstrates how wearing gloves can cause cross-contamination of germs 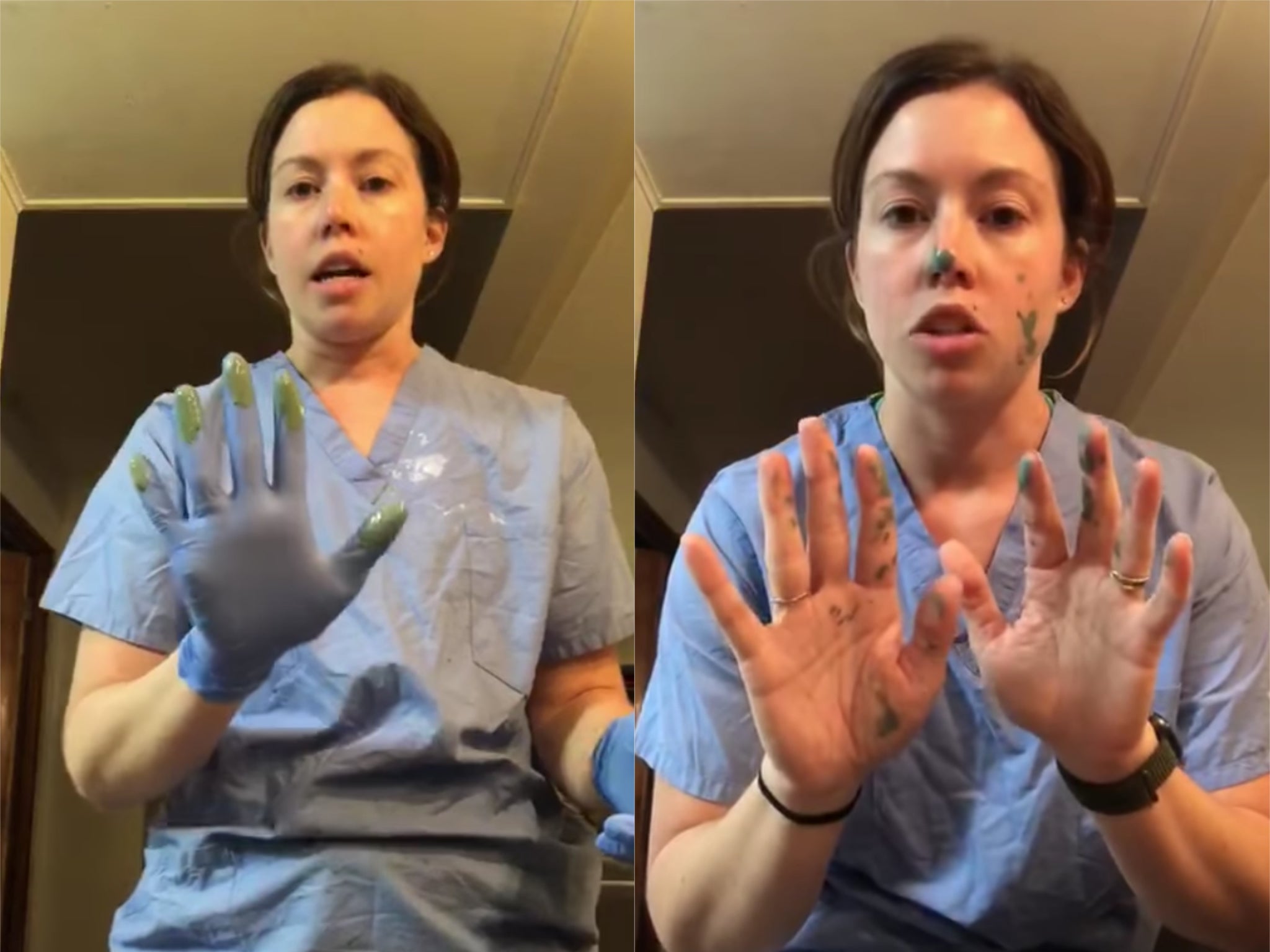 A nurse has shared a video explaining how wearing gloves when you go out to do your grocery shopping can cause cross-contamination of germs.

Molly Lixey, a registered nurse from Michigan, shared a video on Facebook in which she demonstrates how easily you can spread germs when wearing gloves.

In the video, Ms Lixey says that she has seen “a lot of people out in public wearing gloves right now”.

“That’s great. If you want to wear gloves, that’s all fine and well, you absolutely can. But I wanted to remind you of this little thing called cross-contamination,” she states.

The health worker then puts on a pair of blue latex gloves and talks her viewers through the scenario of driving to the supermarket, putting on a pair of gloves in the car and then entering the grocery store.

Ms Lixey describes how when you’re in the supermarket you may choose to wipe down your trolley with wipes, all the while wearing your gloves.

However, when you then go to pick up an item, such as toilet paper, from the shelf, this will result in germs becoming attached to your gloves.

In the video, the nurse uses a shallow bowl of a green, sticky substance to represent the germs, which she dips her hand into when she describes placing the toilet paper in her supermarket trolley.

“Now as you can see, I have all these germs,” she says, as she shows her green-covered finger tips to the camera.

However, after touching the first supermarket item and getting the green substance on her gloves, she then touches her hands together in addition to responding to a text on her phone, which Ms Lixey uses a piece of cardboard to represent in the video.

She continues touching other items in the grocery store, while also touching her nose in order to sort out an itch.

“Oh my goodness, look at all this bacteria,” she says, now with the green “germ” substance on the tip of her nose.

“It’s ok, it’s totally fine, because I’m wearing my gloves! I have my gloves on, I’m so safe in my gloves, right?” the nurse states.

At the end of the imaginary shopping trip, Ms Lixey opens the door to her car while still wearing the gloves, before taking them off.

She emphasises that when a person takes off their gloves, it is important that they do so “appropriately” and place them in the bin.

Once the gloves are off, germs may continue to spread if you then pick up the phone that you already touched while wearing your gloves.

“Look, this is called cross-contamination,” the nurse summarises. “There’s no point wearing gloves if you’re not going to wash your hands every time you touch something. There’s no point friends.

“So do whatever makes you feel safe, but remember there is some science here, and all this fear is just manifesting people into being crazy and to not acting very smart.”

Ms Lixey’s video currently has 1.3m views on Facebook and has been shared 67,000 times.

The NHS says that items such as masks and gloves play a “very important” role in a clinical setting.

However, the organisation outlines that there is “little widespread evidence” that the items are useful for members of the public.

A spokesperson for Public Health England told The Independent that it is “not recommending the use of gloves as a protective measure against Covid-19 for the general public”.

“People concerned about the transmission of infectious diseases should prioritise good personal, respiratory and hand hygiene,” the organisation said, in addition to staying at home and practising social distancing.