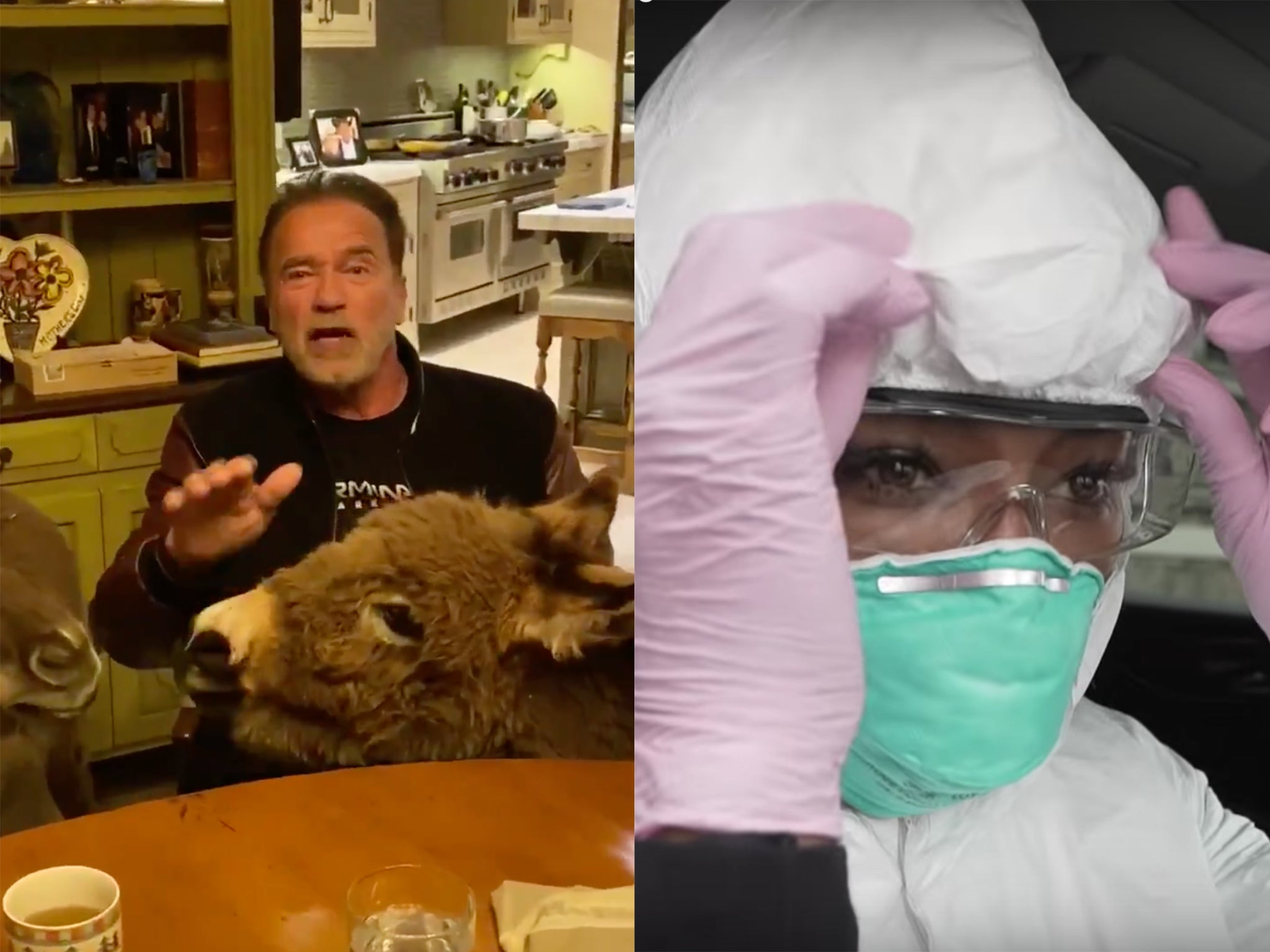 The coronavirus outbreak has had a far-reaching impact across the globe, infecting approximately 169,000 people worldwide.

The pandemic has already changed the way we lead our lives in a variety of ways, prompting people to place greater focus on their hygiene practises, to avoid large gatherings and to reconsider any travel plans they may have in the near future.

It has rocked the lives of the general public and celebrities alike, prompting several A-listers to share messages on their platforms encouraging their followers to tread carefully in light of the virus’ spread.

This week, the British government announced it is to deliver daily televised press conferences to provide updates on the pandemic, thus ensuring officials are more transparent with the public about the spread of Covid-19.

According to the Department of Health, as of yesterday 1,372 people in the UK have tested positive for the virus, 35 of whom have died.

On Monday 16 March, Terminator star Arnold Schwarzenegger delivered a message to his social media followers about the importance of self-isolating, starring in a video alongside his pet ponies Whiskey and Lulu.

“The important thing is that you stay at home because there’s a curfew now,” Schwarzenegger said, speaking about the measures being put into place in his home state of California.

Naomi Campbell recently shared a video on her YouTube channel titled: “Protecting Myself Against Coronavirus”.

In the video, the model puts on a protective suit, a face mask and a pair of gloves in order to travel at the airport, writing in the video’s description: “I was genuinely nervous about travelling at a time like this, but I needed to get back home.”

From Gwyneth Paltrow’s Contagion pun to Bella Hadid’s Fashion Week face mask, here is a selection of A-listers who have reacted to the outbreak on social media.

On Monday 16 March, Arnold Schwarzenegger shared a video on his social media channels urging members of the public to stay indoors and self-isolate.

In the video, the Terminator feeds carrots to his two pet ponies Whiskey and Lulu while delivering his health-orientated message.

“The important thing is that you stay at home because there’s a curfew now,” Schwarzenegger said from his kitchen table.

“No one is allowed out. Especially someone who is 72 years old,” he said in reference to his own age.

“After 65, you’re not allowed out your house anymore in California, so you gotta stay home. That’s what we do. We don’t go to restaurants, we don’t go to anything like that anymore here.”

On Instagram, Naomi Campbell shared a photograph of herself wearing pink rubber gloves and telling her 8.5 million followers to “be safe”.

The British model also wrote: “Don’t forget your gloves” alongside a glove emoji.

In the photo, the model can be seen wearing a grey polo neck top and a gold watch.

In the video, the 49-year-old dons a white protective suit, a face mask and gloves before going to the airport.

On 26 February, Gwyneth Paltrow shared a selfie of her wearing a heavy-duty face mask during a flight to Paris for Fashion Week.

In the image, the actor could be seen dressed in a black mask covering her mouth and nose while sitting in her plane seat.

For the caption, Paltrow referred to the 2011 film Contagion she starred in, which sees a deadly virus sweep the world.

“En route to Paris. Paranoid? Prudent? Panicked? Placid? Pandemic? Propaganda? Paltrow’s just going to go ahead and sleep with this thing on the plane,” she wrote.

Kate Hudson posted a selfie to her Instagram account similar to Paltrow’s amid fears that coronavirus is spreading rapidly.

“Travel. 2020,” Hudson captioned the image along with a flushed face emoji, which showed her wearing a disposable surgical mask.

The actor’s followers were quick to point out that her face mask might not be the right type, with one person commenting: “If you’re worried about corona..only the N95 mask will protect.you..that one won’t do much…just saying.”

The recommendations led Hudson writing a comment of her own on Paltrow’s post, saying: “At least you have the right mask!!!” alongside an eye roll emoji.

On 23 February, supermodel Bella Hadid shared a selfie with her 28.8 million followers while en route to Fashion Week, wearing a face mask on an airplane.

The model was putting her health first as she jetted out of Milan to Paris after the coronavirus outbreak hit parts of Italy.

The 23-year-old also shared an Instagram story video which showed her sitting on a plane with a mask covering her mouth and nose. “Next city lets go [sic],” she captioned the clip.

On 25 February, Selena Gomez shared a series of photographs to document her recent travels to Chicago, Illinois with her mother Mandy Teefey.

The singer posted a gallery of five images from the trip alongside the caption: “Momma and I being tourists. We take great pictures. OH and we went to CrimeCon! Love you Chicago and the bean.”

The final photo in Gomez’s post showed her waiting at Chicago’s O’Hare airport wearing a blue jacket and a mask over her face.

Desperate Housewives star Eva Longoria posted a video on her Instagram page to comfort her 7.7m followers after receiving a flood of messages regarding her recent travels to Italy.

“I am shooting in this small town in Italy. I’m nowhere near the north. Thank you for your concerns,” she said in the clip.

”Everybody was calling and texting me and talking about the coronavirus in the north of Italy. It’s really sad, but we’re further away.” In a previous post she said she would be in the country for one week.

British star Stormzy was recently forced to postpone the Asian leg of his “Heavy Is The Head” world tour due to the spread of coronavirus.

The grime artist wrote on Twitter: “I was seriously looking forward to bringing the #HITH world tour to Asia and playing some epic sold-out shows but due to the ongoing health and travel concerns surrounding the coronavirus.

“I’m regrettably having to reschedule this leg of the tour.” Stormzy has since deleted his social media accounts.

Reality television star Brody Jenner shared a selfie on Instagram of him wearing a face mask while on board a seemingly empty flight to Taiwan.

Jenner was travelling to Bali for a friend’s wedding and ran into his ex Kaitlynn Carter on the flight back.

Carter later shared a video on her Instagram story of her and Jenner wearing face masks as they sat next to one another on the plane. Carter could be seen covering her nose and mouth with a disposable mask, while Jenner appeared to be wearing a face mask with a respirator attached.

“Well, one of us is going to survive the Coronavirus and it’s probably not me in my flimsy mask,” Carter said in the clip as she panned over to Jenner.